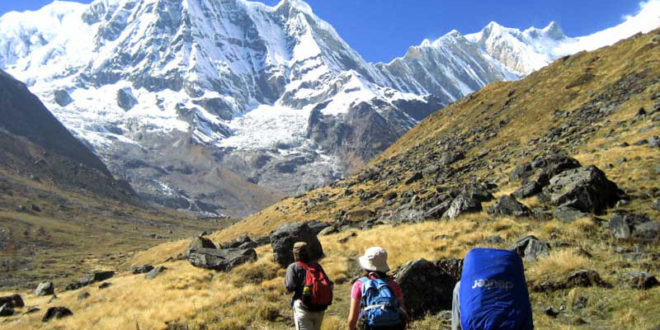 The tourist destinations in the Himalayan region that have remained closed for months after the government imposed a nationwide lockdown in March last year have started reopening.

The Annapurna Conservation Area Project (ACAP) has started opening routes for visitors to enter important trekking destinations. Some of the many destinations within the ACAP have already been opened, while for others, the stakeholders have announced dates for their reopening. The destinations that can be easy to come by when the weather is good are already open, said ACAP officials.

According to ACAP chief Raj Kumar Gurung, Lomanthang, the upper region of the Himalayan district of Mustang, is yet to be opened. Lomanthang has not been opened due to the cold weather. “Otherwise, many other destinations have already been opened and some are in the process of being opened,” he said. A few days ago, Jomsom, the headquarters of Mustang, was opened for tourists. Similarly, Muktinath, a religious destination in Mustang, will open from next Tuesday. Entrepreneurs of Ghandruk have already decided to open Ghandruk, an important destination within the ACAP, from January 14.

Ghorepani has been open since December 16. Another Himalayan district, Manang, has been open since the third week of October. Mardi Himal was opened in September. Entrepreneurs have opened the ways to Annapurna Base Camp (ABC) from Ghandruk via Chhomrong, Deurali and Machhapuchchhre. But in order to reach ABC, one needs to produce a negative report of PCR test for COVID-19.

“Manang was opened in the third week of October, but it was difficult for travelers to cross Thorangla Bhanjyang due to the delay in opening the Mustang district for tourists,” he said.

“Since we have given the right to open the destinations to the local entrepreneurs, we could not intervene and open every place at once,” he further added.

He said that the trekking sector has to support its businesses from domestic visitors as there is less possibility of foreign visitors for now. “I hope that the movement – be it of domestic tourists – doesn’t stop now,” he told Republica, adding, “If we can send tourists to those places, the local entrepreneurs will have some financial relief.”

He said Ghandruk, Ghorepani, Lomanthang and Muktinath are the areas preferred by domestic tourists because of which people had been demanding that these destinations be reopened.