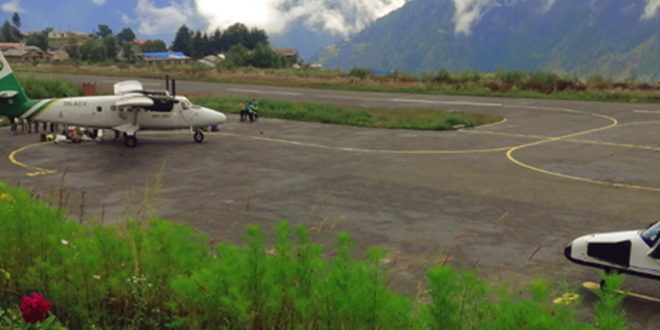 SIMIKOT, Oct 26: A sick person from Kharpunath Rural Municipality-1 of Humla district has been denied a plane ticket to fly to a better health facility.

As a result, the 60-year-old Birjit Shahi, who reached the airport in a stretcher, was left stranded at Simikot Airport. Although he got the ticket for Tara Air on Monday, his attendant was denied a ticket. So, he could not fly alone, leaving his attendant in the district.

Shahi has been suffering from a chronic disease. The District Hospital, Humla had referred him to the better hospital for treatment. Shahi’s son Dirgha said, “How can we send an ailing father alone? He needs a lot of care all the time.”

Students and others with their jobs outside the district have also complained that they were also denied plane tickets despite prodding the offices of airlines companies for weeks. The private airlines conducting flights to Nepalgunj and Surkhet from Simikot Airport — Sita Air, Tara Air and Summit Air– have not been providing service regularly these days.

The plane tickets are provided under the influence of bigwigs and personal contacts in the district during the festival. This has caused hassles to the commoners. The airlines conducting nearly 10 flights a day have reduced their service to one.

Meanwhile, the state-owned Nepal Airlines has not provided service in Humla on a regular basis. It stopped conducting flights in May early this year. The students studying in different cities including Kathmandu, Nepalgunj, Surkhet and Pokhara have been hit hard by the flight suspension.

Dipendra Bohara from Simkot Rural Municipality-2 complained that common people were denied plane tickets although they visited the airlines office several times. The private airlines like Tara Air and Summit Airlines are selling the tickets secretly, he added.