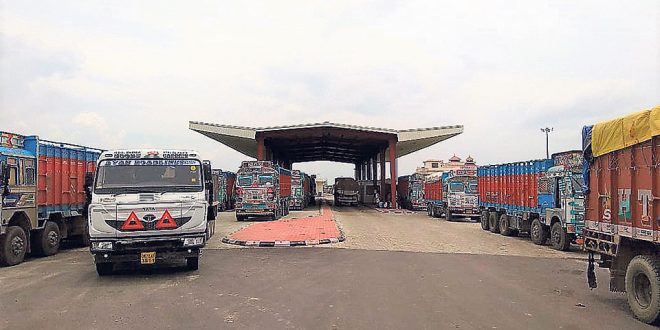 KATHMANDU, Nov 24: The Birgunj Customs Office collected customs revenue worth Rs 70.12 billion in the first four months of the current fiscal year, around eight percent more than its target of Rs 65.11 billion for the period.

Birgunj customs is one of the main entry points for Nepal’s trade with India and the third countries. According to the Department of Customs (DoC), the revenue collection amount of the customs office surpassed the target by over Rs 5 billion during mid-July and mid-November.

Following a decline due to the impacts of the coronavirus pandemic, there has been a massive rise in the country’s cross-border trading. During the review period, the customs office collected Rs 24.41 billion in customs duty against the target of Rs 24.12 billion. Similarly, the collection of value added tax also stood at Rs 26.48 billion against the target of Rs 20.81 billion.

Of the imported goods, customs revenue collection on vehicles import soared by 28 percent while that on import of petroleum products increased by 33 percent, according to the DoC.