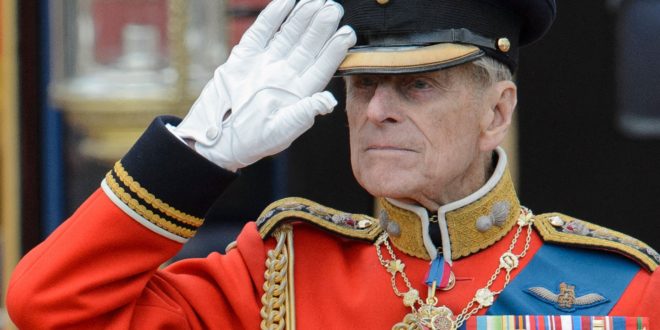 (FILES) In this file photo taken on June 16, 2012, Britain's Prince Philip, Duke of Edinburgh salutes as he watches the troops ride past outside Buckingham Palace following the Queen's Birthday Parade, 'Trooping the Colour' at Horse Guards Parade in London . - Queen Elizabeth II's 99-year-old husband, Prince Philip, has been moved back to a private hospital to recuperate from a heart procedure at a specialist cardiac unit, Buckingham Palace said on March 5, 2021. (Photo by LEON NEAL / AFP) (Photo by LEON NEAL/AFP via Getty Images)

The Duke of Edinburgh, once described by the Queen as “my strength and stay”, was the longest-serving royal consort in British history.

His Royal Highness the Duke of Edinburgh, the man who has been the Queen’s steadfast support for more than seven decades, has died.The duke, who returned to Windsor Castle three weeks ago after a month in hospital, died this morning two months before his hundredth birthday.

Buckingham Palace said in a statement: “It is with deep sorrow that Her Majesty The Queen announces the death of her beloved husband, His Royal Highness The Prince Philip, Duke of Edinburgh.

“His Royal Highness passed away peacefully this morning at Windsor Castle.