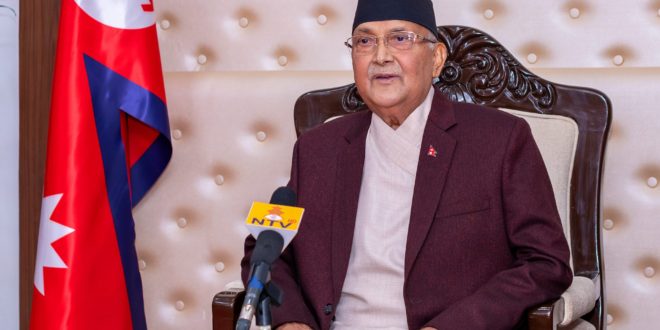 The defendants including PM Oli have submitted written response to the show-cause order issued by the constitutional bench hearing the 13 writ petitions against House dissolution by President Bidya Devi Bhandari on recommendation of PM Oli on December 20, according to Joint Spokesperson of the SC Devendra Dhakal. He revealed that each defendant has sent separate replies to all 13 petitioners through the Office of the Attorney General.

Similarly, recommendation for HoR dissolution and original copy of decision on it were also sought from the President’s Office, and Office of the Prime Minister and Council of Ministers. The original documents on registration of no-confidence motion were sought from the federal parliament secretariat.

The documents about name and number of lawmakers in the House just before its dissolution will also be brought from the federal parliament secretariat. The SC had also decided for the amicus curiae from three advocates of Nepal Bar Association and two senior most advocates and advocates from the SC Bar.

The order had further mentioned that the hearing would be conducted regularly from January 6. A total of 13 writ petitions were filed against HoR dissolution by President Bidya Devi Bhandari on recommendation of Prime Minister KP Sharma Oli on December 20.

Advocate Prabesh KC had filed a writ petition against HoR dissolution on behalf of members of the dissolved House Dev Prasad Gurung, Krishna Bhakta Pokharel, Sashi Shrestha and Ram Kumari Jhankri. In the petition, he had demanded the recommendation be scrapped, arguing it violated House’s right to continue for five years.

The Constitution does not have clear provision about House dissolution. Article 85(1) of the Constitution states ‘Except when dissolved earlier, the term of House of Representatives shall be five years.’

Some constitutional experts argue that the Constitution envisions House dissolution due to the use of term ‘dissolved earlier’. But others argue that the provision has been kept for the situation of inability to choose the PM.

Article 76(7) states ‘If the Prime Minister appointed according to clause (5) fails to get the vote of confidence or if any member fails to be appointed as Prime Minister, the President shall, on the recommendation of Prime Minister, dissolve the House of Representatives and fix a date to conduct another election within six months.’