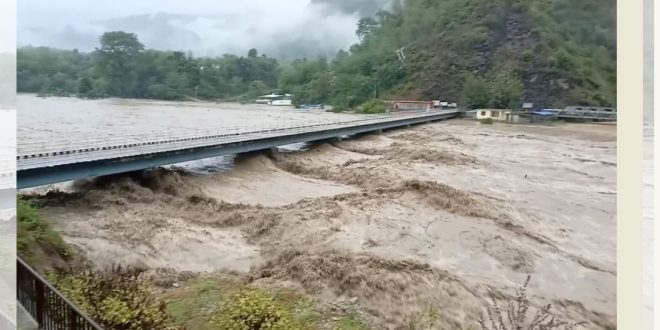 People worried as flow of water in Seti River rises

The bridge over the Seti River connecting the two districts – Achham and Bajura – including the district headquarters Silgadhi, is at risk of being swept away as the flow of water in the river has increased.

Due to the continuous rain for the past three days, the flow of water in the river has suddenly increased and the transport service through the bridge has come to a standstill. The district administration office has urged all the citizens to remain cautious as the settlements around the river are at risk of floods.

Chief of the Area Police Office, Dipayal, and Sub Inspector of Police, Rup Singh Thapa said that the movement of vehicles on the bridge has been stopped since the morning after the water level touched the bridge. He said, “We have stopped the traffic as the flood has reached the level of the bridge..

After the bridge was closed due to the flood, dozens of vehicles coming from Terai to Silgadhi, the district headquarters of Doti, to the neighboring districts of Achham and Bajura were stopped at Pipalla Bazaar, according to the District Traffic Police Office, Dipayal.

Marisa Pariyar, a local resident of Dipayal Bridge Bazaar, said that the settlements near the river have also been inundated due to the flood in the river. She said, “The flood is of a bigger scale. It has inundated shops and houses in the marker near the bridge. We have not been able to sleep all night.”

“Electricity supply to the district has also been disrupted since Monday afternoon due to rains,” said Bharat Bahadur Dwariya of Nepal Electricity Authority, Dipayal. According to him, the power supply was disrupted after trees fell on the 33 kV transmission line which distributes power in the hilly district.

Similarly, Bista also informed Republica that all the three security agencies of the district, Nepal Army, Nepal Police and Armed Police Force have been instructed to be on high alert as the risk of floods and landslides has increased due to continuous rains. However, according to the District Disaster Management Committee, no human casualties have been reported in the district so far due to flooding.