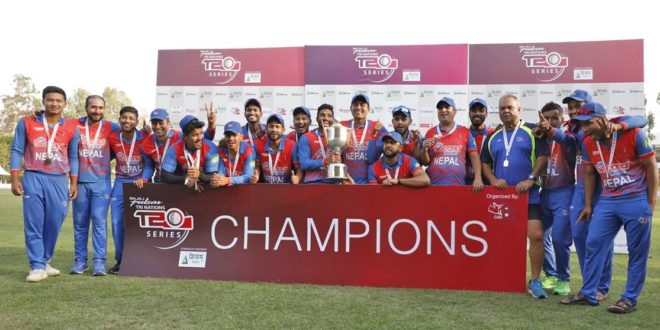 Nepal lift title with the biggest win over the Netherlands

Nepal have won the title of Tri-nation T20 Series being held at the Tribhuvan University Cricket Stadium of Kathmandu.

In the match held on Saturday, the hosts defeated the Netherlands by a wide margin of 142 runs.In the first innings of the match, Nepal were forced to bat first by losing the toss. However, they made a total of 238 runs, one of the biggest in their history.

Chasing the 239-run target, the Dutch, however, could make only 96 runs before all of their batsmen were dismissed.

While Nepal batted, opener Kushal Bhurtel scored the highest of 77 runs including eight fours and three sixes in 55 balls. Likewise, Kushal Malla scored 50 runs not-out and deputy captain Dipendra Singh Airee 48 runs not-out.The hosts continued their impressive performance in the second innings also as they claimed all wickets of the Dutch in 17.2 overs, restricting them to a meagre 96 runs.