Lumbini The Birth Place Of Lord Gautam Buddha In Nepal

Lumbinī is a Buddhist pilgrimage site in the Rupandehi District of Province No. 5 in Nepal. It is the place where, according to Buddhist tradition, Queen Mahamayadevi gave birth to Siddhartha Gautama in 563 BCE.Gautama, who achieved Enlightenment some time around 528 BCE, became the Buddha and founded Buddhism. Lumbini is one of many magnets for pilgrimage that sprang up in places pivotal to the life of the Buddha.

Lumbini has a number of older temples, including the Mayadevi Temple, and various new temples, funded by Buddhist organisations from various countries, have been completed or are still under construction. Many monuments, monasteries and a museum, and the Lumbini International Research Institute are also within the holy site. Also, there is the Puskarini, or Holy Pond, where the Buddha’s mother took the ritual dip prior to his birth and where he had his first bath. At other sites near Lumbini, earlier Buddhas were, according to tradition, born, then achieved ultimate Enlightenment and finally relinquished their earthly forms.

Lumbini was made a World Heritage Site status by UNESCO in 1997.

In the Buddha’s time, Lumbini was situated in east of Kapilavastu and southwest Devadaha of Shakya, an oligarchic republic.According to Buddhist tradition, it was there, that the Buddha was born. A pillar discovered at Rummindei in 1896 is believed to mark the spot of Ashoka‘s visit to Lumbini. The site was not known as Lumbini before the pillar was discovered. According to an inscription on the pillar, it was placed there by the people then in charge of the park to commemorate Ashoka visit and gifts.The park was previously known as Rummindei, 2 mi (2 mi (3.2 km)) north of Bhagavanpura.

The Sutta Nipáta (vs. 683) states that the Buddha was born in a village of the Sákyans in the Lumbineyya Janapada. The Buddha stayed in Lumbinívana during his visit to Devadaha and there preached the Devadaha Sutta.

In 1896, General Khadga Samsher Rana and Alois Anton Führer discovered a great stone pillar at Rummindei, according to the crucial historical records made by the ancient Chinese monk-pilgrim Xuanzang in the 7th century CE and by another ancient Chinese monk-pilgrim Faxian in the early 5th century CE. The Brahmi inscription on the pillar gives evidence that Ashoka, emperor of the Maurya Empire, visited the place in 3rd-century BCE and identified it as the birth-place of the Buddha. The inscription was translated by Paranavitana:

When King Devanampriya Priyadarsin had been anointed twenty years, he came himself and worshipped (this spot) because the Buddha Shakyamuni was born here. (He) both caused to be made a stone bearing a horse (?) and caused a stone pillar to be set up, (in order to show) that the Blessed One was born here. (He) made the village of Lummini free of taxes, and paying (only) an eighth share (of the produce).

Excavation at the Mayadevi Temple in 2013

According to Robin Coningham, excavations beneath existing brick structures at the Mayadevi Temple at Lumbini provide evidence for an older timber structure beneath the walls of a brick Buddhist shrine built during the Ashokan era (3rd-century BCE). The layout of the Ashokan shrine closely follows that of the earlier timber structure, which suggests a continuity of worship at the site. The pre-Mauryan timber structure appears to be an ancient tree shrine. Radiocarbon dating of charcoal from the wooden postholes and optically stimulated luminescence dating of elements in the soil suggests human activity began at Lumbini around 1000 BCE.The site, states Coningham, may be a Buddhist monument from 6th-century BCE. Other scholars state that the excavations revealed nothing that is Buddhist, and they only confirm that the site predates the Buddha. 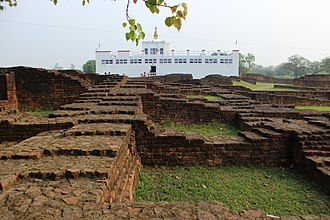 Mayadevi Temple and ruins of ancient monasteries in Lumbini

Lumbini is 4.8 km (3 mi) in length and 1.6 km (1.0 mi) in width. The holy site of Lumbini is bordered by a large monastic zone in which only monasteries can be built, no shops, hotels or restaurants. It is separated into an eastern and western monastic zone, the eastern having the Theravadin monasteries, the western having Mahayana and Vajrayana monasteries. There is a long water filled canal separating the western and eastern zones, with a series of brick arch bridges joining the two sides along the length. The canal is serviced by simple outboard motor boats at the north end which provides tours.

The holy site of Lumbini has ruins of ancient monasteries, a sacred Bodhi tree, an ancient bathing pond, the Ashokan pillar and the Mayadevi Temple, where the supposed place of birth of Buddha is located. From early morning to early evening, pilgrims from various countries perform chanting and meditation at the site.

A non-governmental organization named Samriddhi Foundation started in 2013 working extensively in the field of education and health specially in government schools of the area where underprivileged children study. A non-governmental organisation called “Asia Pacific Exchange and Cooperation Foundation” (APECF) backed by chairman of the Unified Communist Party of Nepal (Maoist) and then Prime Minister Prachanda, the Chinese government and a UN group called “United Nations Industrial Development Organization” (UNIDO) signed a deal to develop Lumbini into a “special development zone” with funds worth $3 billion. The venture was a China-UN joint project. A broader ‘Lumbini Development National Director Committee’ under the leadership of Pushpa Kamal Dahal was formed on 17 October 2011. The six-member committee included Communist Party of Nepal (Unified Marxist-Leninist) leader Mangal Siddhi Manandhar, Nepali Congress leader Minendra Rijal, Forest Minister Mohammad Wakil Musalman, among other leaders. The committee was given the authority to “draft a master plan to develop Lumbini as a peaceful and tourism area and table the proposal” and the responsibility to gather international support for the same.

Lumbini is our Nepal pride and honor so we all Nepalese people should visit and tell all people wherever we go in any country.

2019-01-06
Share
Previous We Are Living In A Republic Not A Rape-Public
Next Dharan Queen of The East, Beautiful town of east Nepal, City of Lahurey