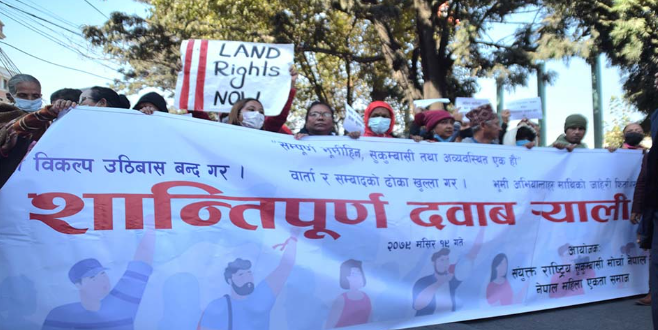 Samyukta Rastriya Sukumbasi Morcha Nepal and Mahila Ekata Samaj held a march against the government’s crackdown on landless squatters from Maitighar to New Baneshwor on Monday.

They conducted peaceful pressure marches carrying placards with the slogans ‘Open the doors of dialogue and debate’, ‘ Ensure the rights to live with options,’, ‘for how long do we have to live without land certificate’, ‘There should be a civilized society with civilization’.

Squatters and unorganized residents protested saying that they should not be evicted without alternatives. The protestors also demanded the withdrawal of the complaint filed by the Kathmandu Metropolitan City against those who attacked the squatters’ settlement in Thapathali when they tried to bulldoze the settlement.