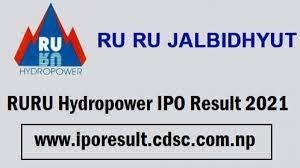 The IPO allotment of Ru Ru Jalbidhyut Limited is concluded today i.e. 2078/01/03 in the premises of issue manager NMB Bank Limited at 08:30 A.M.

As per the allotment module, a total of 37,916 applicants were allotted 10 units each via lottery, and the remaining 15,52,980 applicants were returned empty hands. The 7 lucky applicants get 1 unit extra.