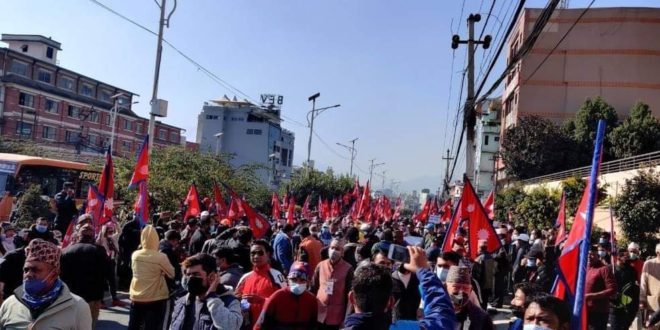 Hundreds of people staged a protest rally  from Baneshwor to Maitighar Mandala demanding restoration of monarchy in the country.

Youths, elderly and children and people of all professions joined today’s protest.

The participants held the national flag, and displayed pictures of Prithivi Narayan Shah, the first king of modern Nepal and pictures of former king and queen, Gyanendra Shah and Komal Shah. The participants displayed placards and chanted slogans that read, ‘Raja Aau Desh Bachau,’ (King, come forward and save the country.) Similarly, other slogans read, ‘Maintain unity in the country’, ‘King and people are equal’.

Dozens of similar but even larger demonstrations have been held in major cities across the country for the last few weeks.