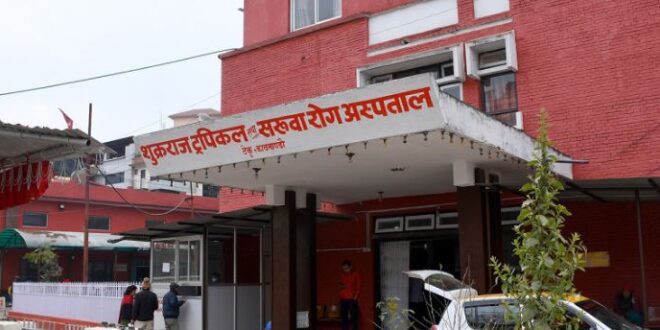 May 13: The government Wednesday said that it has released Rs.240 million to the account of the Sukraraj Tropical and Infectious Disease Hospital, Teku, for expanding medical facilities.
According to a press note issued by the Office of the Prime Minister and Council of Ministers (OPMCM) this evening, the Ministry of Finance has released the amount for expanding oxygen pipeline in the ICU beds, refilling liquid oxygen, paying bed charges and food expenses.

Similarly, the government has released Rs. 62.5 million to Patan Health Sciences Academy, Rs. 27.2 to BP Koirala Institute of Health Sciences and Rs. 55 million for paying the cost to install and operate high dependency units (HDUs), according to Joint Secretary and spokesperson Kiran Raj Sharma at the OPMCM. The government has also given approval for conducting a charter flight on May 15 to bring 600 oxygen cylinders that had been arranged by non-residing Nepalis in Oman.
According to a update report from the Prime Minister’s Office, in the last 24 hours 86 foreign national arrived in Nepal from New Delhi, India, under air bubble arrangement. Also, within the last 24 hours, the government airlifted 407 foreigners from different parts of the country and among them, 55 were rescued for medical purpose.
According to an update provided to the OPMCM, the Ministry of Home Affairs informed that it collected 4,816 oxygen cylinders in the last 24 hours.

2021-05-13
Share
Previous 32,000 vials of Remdesivir arrive in Nepal
Next Oli takes oath as PM, inducts old ministers into the cabinet