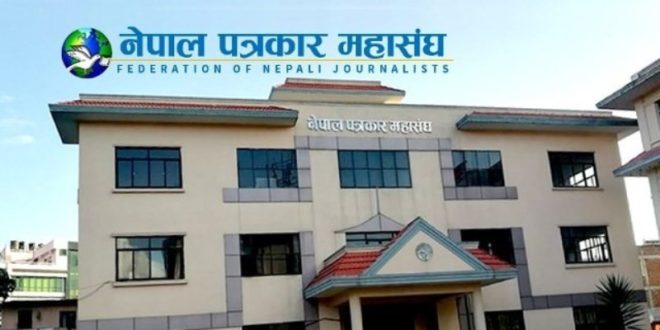 Federation of Nepali Journalists Election Taking Place Across The Country

Federation of Nepali Journalists (FNJ) are taking place across the country today to elect new leaderships in its all chapters, province committees and central committee. This time FNJ has adopted the first-ever direct voting system to elect its central committee leadership.

A total of 13,122 members are voting for new leadership in the central committee, province committees, district chapters, institutions (Pratishthan) and associates committees. Voting will take place from 9.00 am to 5.00 pm today. Vote count will initiate on Wednesday after voting is over.

According to Coordinator of FNJ Central Election Committee, Kapil Kafle, vote results of all levels would come on April 8 if there was no obstruction anywhere.

Though new leadership has been elected unopposed in some chapters and Pratishthan, the declaration would be made on April 7 today. The election this time would elect more than 3,000 office-bearers and members consisting of over 33 percent women in the committees, Kafle informed. The FNJ has adopted a complete inclusive system in all its structures.

As many as 152 candidates have filed their candidacies for 49 posts in the central committee. Bipul Pokharel, Nirmala Sharma and Gajendra Budhathoki have registered their candidatures for central leadership.

FNJ holds its election every three years for picking news leadership in its all committees. All the members are directly voting for leadership in all the committees this time.

Established as an Association of Nepali Journalists some 65 years ago in16 Chaitra 2012, the FNJ has been continuously showing its strong presence at the forefront of the movement for freedom of expression, the press freedom and democracy. The Association was transformed into the Federation in 29 Jeth 2053 BS.