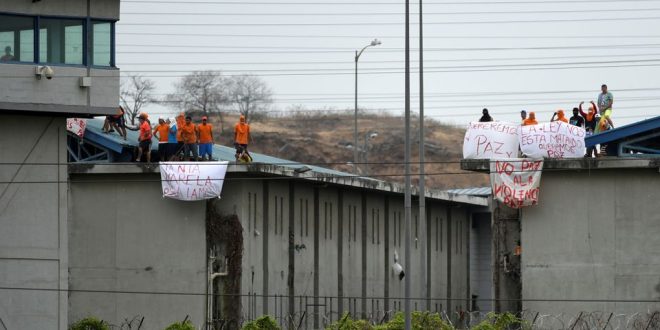 GUAYAQUIL, Nov 14: At least 68 prisoners were killed and more than two dozen injured in overnight violence at Ecuador’s Penitenciaria del Litoral prison, the government said on Saturday, in what officials characterize as fights among rival gangs.

The penitentiary, located in the southern city of Guayaquil, is the same prison where 119 inmates were killed in late September in the country’s worst-ever incident of prison violence.

The government has blamed disputes between drug trafficking gangs for control of prisons for the violence.

Dozens were gathered outside the prison waiting for news of loved ones, who many said they had not heard from since Friday afternoon.

Cristina Monserrat, 58, still has not heard from her younger brother who has been in prison for a year.

“What is happening inside is reprehensible, people killing each other and the saddest thing is they have no conscience,” said Monserrat. “My brother is alive, my heart tells me so.”

Lasso in September declared a 60-day state of emergency in the prison system, which freed up government funding and allowed for military assistance in control of the prisons.

On Saturday, the president called on the constitutional court to allow the military to enter prisons, instead of providing only outside security.

The latest disturbance was set off by a power vacuum following a gang leader’s release, governor of Guayas province Pablo Arosemena said in a press conference earlier in the day.

“The context of this situation is that there was no leader of the gang that has this cell block because a few days ago that prisoner was released,” Arosemena said. “Other cell blocks with other groups wanted to control them, get inside and have a total massacre.”

Videos on social media purportedly posted by detainees overnight showed them begging for help to stop the violence as shots and explosions sounded in the background. Reuters could not independently verify the origin of the videos.

There has been a wave of disturbances in the South American country’s prisons, which house some 39,000 detainees, since the December 2020 killing of ‘Rasquina,’ the leader of the Los Choneros gang, months after he was released from prison.

His death left a power vacuum, officials said at the time, as less well-known gangs attempted to take control of the country’s prisons. Gang rivalries are connected to competition for drug trafficking alliances with international cartels, ex-officials said.

Officials said a February incident which killed 79 detainees was a response to Rasquina’s death. Another 22 people died in a July riot.

“We are fighting against drug trafficking, against criminal gangs who fight each other for territory inside and outside prisons to distribute drugs,” governor Arosemena said.

Some of those killed in the September violence at Penitenciaria del Litoral were decapitated or burned, the attorney general’s office has said, and dozens were injured.

A total of 11 people were found hung in the penitentiary in October, which authorities have said may have been suicides.

“I don’t know anything, what we ask for are answers,” said Estefania, who declined to give her surname, and said her husband is jailed for a robbery. “I don’t know if he’s alive or dead.”