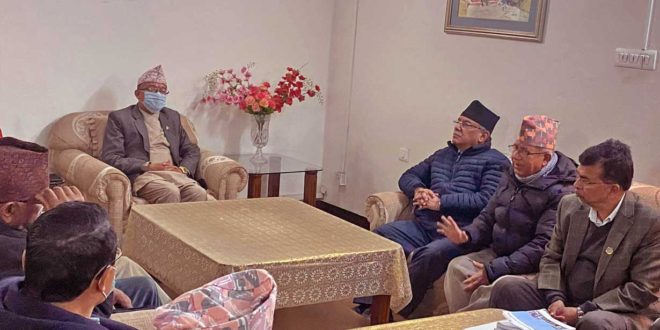 eaders of the Dahal-Nepal faction of the ruling Nepal Communist Party (NCP) including chairpersons Pushpa Kamal Dahal and Madhav Kumar Nepal reached the Election Commission office at Kantipath in the capital on Tuesday morning, demanding that they be granted the official recognition as the legitimate NCP and the election symbol ‘sun’, claiming that the faction commands a two-thirds majority in the party.

During a meeting with EC office-bearers, the chairmen duo of the faction and leaders Rajendra Pandey, Ghanshyam Bhusal and Barshaman Pun reiterated that the EC should recognize them as the legitimate NCP since they command the support of 441 central committee members.

The meeting comes at a time when the rival factions of the NCP are struggling hard to be recognized as the official party legally.

A central committee meeting of the faction held on Monday decided to ask the election body to grant them the official recognition as the legitimate NCP and election symbol saying that the faction commands a two-thirds majority in the party.

Earlier, both rival factions of the NCP sent separate letters to the commission and claimed that they should be granted the official recognition.