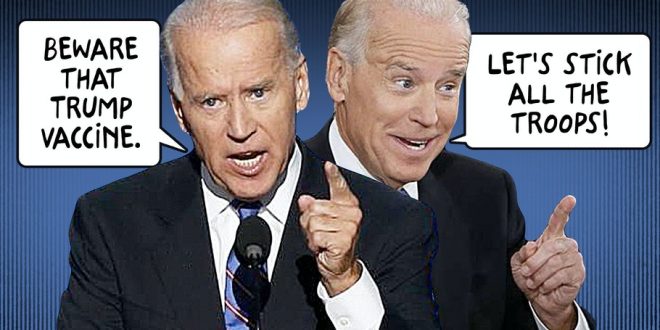 Elections do indeed have consequences. And aside from the twin calamities on our southern border and in our national treasury, there’s no greater evidence of this than the Democrats’ head-snapping flip-flop on the safety and efficacy of Donald Trump’s Operation Warp Speed vaccines.

For example, it seems like only yesterday when Joe Biden was warning us, “I trust vaccines, I trust scientists, but I don’t trust Donald Trump.” And yet here he is today, telling our nation’s 1.3 million active-duty troops to buckle up and take the poke.

We wonder: What changed in the interim? Certainly not the vaccine. Heck, it still doesn’t even have FDA approval. Why, if we didn’t know better, we’d swear Scranton Joe’s initial resistance — and that of VP Kamala Harris and many other Democrats — had been purely political.

“Democrats and the Leftmedia have the temerity to lament the politicization of a vaccine that they are entirely responsible for creating,” our Thomas Gallatin wrote recently. “The Biden administration is now demanding that social media companies crack down on COVID ‘misinformation’ because it is ‘killing people.’ Democrats made this mess. They seeded vaccine mistrust. But now they want to blame Trump and Republicans.”

In his message to the troops, our nation’s wokest-ever, white-supremacist-hunting defense secretary, Lloyd Austin, begins: “As many of you know, President Biden asked me to consider how and when we might add the coronavirus disease 2019 (COVID-19) vaccines to the list of those required for all Service members.”

That’s a clever formulation — a formulation meant to lump these novel experimental COVID-19 vaccines in with a host of tried-and-true vaccines we’ve been taking since we were kids. But vaccines for measles and smallpox and polio have proven track records built over decades. These vaccines? Not so much. While they appear to be both safe and reasonably effective, we have no way of knowing about any potential downstream effects they might have. Both the Pfizer and Moderna versions, for example, use a radically different approach compared to traditional vaccines.

Perhaps sensing this, Austin and his flacks then try to reassure the troops about the stick: “By way of expectation,” they write, “public reporting suggests the Pfizer-BioNTech vaccine could achieve full FDA licensure early next month.”

Data from the DOD indicate that more than a million active-duty service members have already gotten the shot. Still, that means hundreds of thousands of them haven’t. What’s holding them up? No doubt a variety of reasons. And who’s to say those reasons aren’t good enough to keep their government from forcing an experimental injection into their bodies?

When a warrior enlists in the American Armed Forces, he swears an oath “to support and defend the Constitution of the United States against all enemies, foreign and domestic,” and to bear “true faith and allegiance” to that same Constitution. But he also swears to obey his chain of command, which includes the president of the United States, as well as the officers appointed over him.

Are the Constitution and the chain of command in conflict here? It’ll be interesting to see whether certain troops believe a bit of pushback is in order.

2021-08-11
Share
Previous 150 Nepali passengers barred from traveling to Dubai
Next IPO Allotted: Sanima Life Insurance Gets Highest Number of Applicants But Only 1 in Every 4 Applicants Get 10 Unit Shares on Meroshare