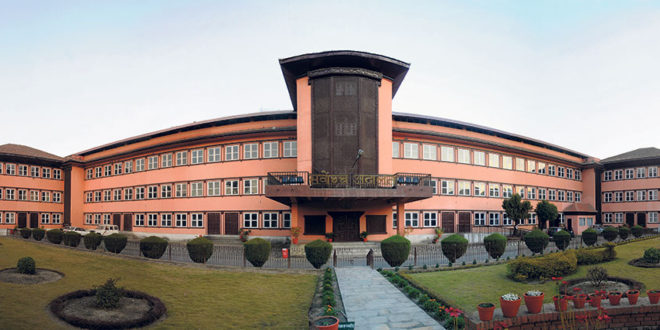 The Supreme Court on Friday registered a writ petition filed by Speaker of the House of Representatives (HoR), Agni Prasad Sapkota, seeking the invalidation of the recent appointments in various constitutional bodies.

The top court scheduled the hearing on the case for coming Sunday.

In his writ petition, Speaker Sapkota has claimed that the recommendations made by Prime Minister KP Sharma Oli-led Constitutional Council (CC) and appointments made by President Bidya Devi Bhandari and Chief Justice Choelndra Shumsher JBR are ‘unconstitutional’ and sought the scrapping of the decision of the CC taken on December 20 last year.

Speaker Sapkota also asked the top court to issue an interim order not to allow the newly-appointed office bearers of the constitutional organs to discharge their duties.

In his writ petition, the speaker sought action against as many as 39 dignitaries including President Bhandari, Prime Minister KP Sharma Oli, Chairman of National Assembly Ganesh Prasad Timilsina, Chief Justice Cholendra Shumsher JBR, and Chief Secretary Shankar Das Bairagi. Moreover, the 32 persons assuming office on Wednesday itself after taking the oath of office and secrecy have also been made opponents in Sapkota’s petition.

The government had recommended as many as 45 appointments at various constitutional institutions. Chief Justice Cholendra SJR on Feb 3 administered the oath of office and secrecy to all those newly-appointed members in the presence of President Bidya Devi Bhandari without a parliamentary hearing.

As per the Work Procedures Regulations 2075 BS of the federal parliament, there is a provision of automatic appointments of those recommended by the constitutional council if their hearing is not held for 45 days.