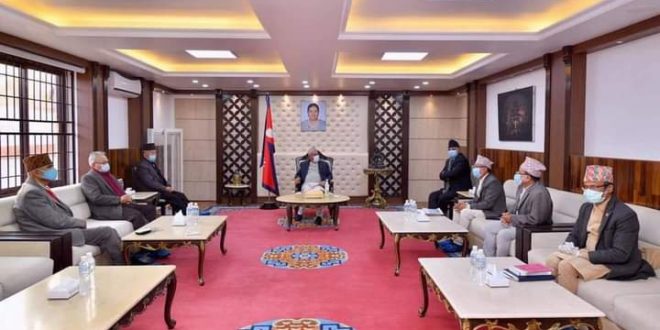 The constitutional warfare between the CPN chairmen have taken an interesting turn with revelations that 90 ruling party lawmakers had registered no confidence motion against Prime Minister (PM) KP Sharma Oli even before President Bidya Devi Bhandari dissolved the House of Representatives (HoR) on Sunday.

The President’s Office issuing a statement in the afternoon stated that the House has been dissolved on recommendation of PM Oli and the council of ministers and the next election will be held in May but CPN Chief Whip Dev Gurung told Setopati that CPN lawmakers had registered the no confidence motion in the House immediately after PM Oli took the decision to recommend House dissolution in the morning.

Sources at the Parliament Secretariat claimed that 90 CPN lawmakers have signed the motion registered in accordance to Article 100(4) of the Constitution which states ‘One-fourth of the total number of members of the House of Representatives may table in writing a no-confidence motion against the Prime Minister.’

“We have registered the no confidence motion against the PM deeming that the government starting taking unconstitutional step after the reports about recommendation for House dissolution came in the media.”?