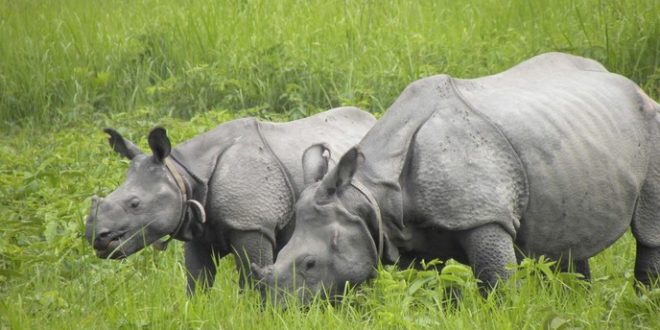 There are 752 one-horned rhinoceros in various protected areas of Nepal, according to the census held in March-April 2021.

Results of the census that began on March 22 was made public at the Chitwan National Park, the biggest habitat of rhinos in Nepal, on Saturday.This figure is 107 more than the 2015 population as the census six years ago had counted 645 rhinos across Nepal, announced Nepal’s Forest and Environment Secretary Bishwa Nath Oli.

But, according to the latest count, there are 694 rhinos in Chitwan National Park, 38 in Bardiya National Park, 17 in Shuklaphanta National Park, and three in Parsa National Park, making a total of 752.Of them, 146 are male, 198 are female whereas 408 have not been identified sex-wise. Based on the age, there are 520 adult rhinos, 96 semi-adults and 136 calves.Earlier, the count of the endangered one-horned rhinoceros was repeatedly halted in 2019 and 2020 due to the budget crisis and the Covid-19 pandemic respectively.

Officials had feared a decrease in the number of the valued species as the number of rhinos dying natural death had increased of late although the poaching was significantly controlled until one incident in September last year. However, the number rose by an encouraging 16.5 per cent.