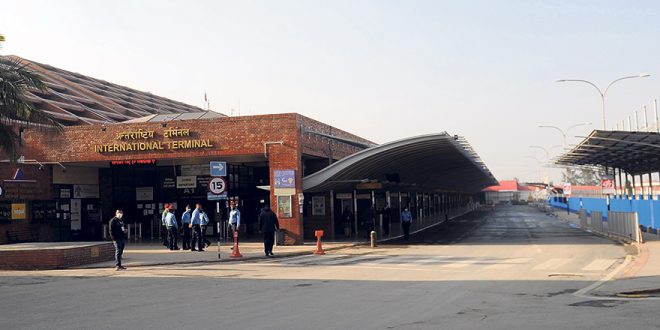 Nepali youths have been facing problems in going abroad for foreign employment because of the rules implemented by different countries due to the COVID-19 pandemic. As many as 150 passengers were barred from traveling to Dubai on Monday due to new rules imposed by the United Arab Emirates (UAE).

The UAE government has imposed a rule that only those who have gone through an antigen test at the airport before boarding the aircraft can enter the country. As there is no facility for antigen testing at Tribhuvan International Airport in Nepal till now, 150 passengers going to Dubai were stopped. More than 90 percent of these passengers were young people going to Dubai for employment.

Passengers who were scheduled to fly to Dubai via Nepal Airlines Corporation’s RA 229 and Himalaya Airlines’ HN 565 returned from the airport on Monday. According to airport officials, the plane flew empty as no passengers were allowed to board due to the new rule enforced by the Air Transport Operations Dubai Civil Aviation Authority.

The UAE government has recently listed 16 countries in the world at high risk of COVID infection. New rules have been introduced for those coming from the countries in this list. Nepal, India, Pakistan, Nigeria, Sri Lanka and Uganda have been included in the list of high risk countries. Due to this new rule, flights from Nepal to Dubai have become uncertain. The flight from Dubai to Nepal is still the same.

According to Nirmala Thapa, Labor Counselor at the Nepali Embassy in the UAE, the Air Transport Operations Dubai Civil Aviation Authority has tightened rules on flights since August 7. Passengers vaccinated against COVID are also required to have a report of COVID test within 48 hours and an antigen test report carried out at the airport, she said.

“The UAE has placed Nepal in the red zone due to the growing COVID infection in Nepal. The scope of testing on the Kathmandu-Dubai flight has been changed due to the infection,” she said in a telephone conversation with Republica. “The period of the implementation of the new rule will depend upon the COVID cases in Nepal.”

Himalaya Airlines stated that no passengers could be flown to Dubai in Monday night’s flight after the new rules were issued. According to Ujjwala Dali, Head of Department of Brand & Service Improvement of the company, the passengers had arrived at the airport on August 7 carrying a report of COVID test and vaccination certificates to go to Dubai via Himalaya Airlines’ flight.

She said that the company would give priority to the passengers in its first flight if the government arranges for antigen testing at the airport. “Passengers can even get their ticket price back,” she said.

According to a passenger who arrived at the airport to fly to Dubai, some of the passengers returned from the airport and went to their relatives, while others were kept at the Jamal-based Hotel Pacific by the airline.

He said that even those who arrived at the airport carrying antigen test reports from Kathmandu Medical College near the airport were barred from flying saying that they needed a test report done at the airport. Employees of Nepal Airlines Corporation did not come into contact. The corporation’s plane, scheduled to take off at 11:30 PM, flew to Dubai empty at 1:00 PM.